On Tuesday, April 7, 2020 at 11:13 am, the Chestertown Volunteer Fire Company, Kent & Queen Annes Rescue Squad and Kent County EMS was dispatched to the Motor Vehicle Collision with Injuries in the 26800 block of (Maryland 291) Morgnec Road, just east of the Morgnec Bridge. Ambulance 3 (Galena VFC) was returning from the hospital and drove up on this incident right after it happened.

They found a single vehicle crash where the car had completely severed a utility pole. The vehicle was on it's side, on fire with power lines draped across it. The single occupant / driver was still in the vehicle and trapped. When the Rescue Box was dispatched, two (2) additional Rescue Trucks were added to the assignment.

Initially, it was unknown if the power lines were live. In this situation, we always treat them as if they are. For safety reasons, we take no action until we can confirm the power has been cut. When Ambulance 3 arrived, an engineer from Choptank Electric was already there. He stated the power was off, however, the power lines were not grounded. He informed the crew on Ambulance 3 that until the cables could be grounded, the wires were still energized.

However? With the vehicle still energized and on fire, immediate action was required to protect the driver, still trapped in the vehicle. While water and electricity don't mix, dry chemical fire extinguishers work very well in this type of scenario. They effectively suppress fire without conducting electricity. It just so happened, Chestertown VFC President Dave Eason, in a privately operated vehicle, happened on the crash scene about the same time as Ambulance 3. President Eason took the lead with this part of the incident. Using dry chemical fire extinguishers, some of which were provided by civilian bystanders, he was able to keep the fire in check, effectively protecting the patient. While we did not get the names of those bystanders who provided fire extinguishers, we would like to extend a very special "Thank You!" to them. Your contributions of equipment went a long way towards saving a life today. We would also like to recognize the fast response of the Choptank Electric crews. Their quick response enabled us to handle this crash in a timely, efficient manner.

Once we received confirmation the power lines were grounded and the car was no longer energized, crews went to work. Our crews used "Rescue 42 Struts", a specialized system for these types of situations... to stabilize the car, keeping it from tipping over. Additionally, a line was secured to the car, using our engine as an anchor, to prevent the car from sliding into the marsh. At the same time, a hose-line from an engine on the scene, previously deployed, finished extinguishing the fire.

Once access was gained, it was determined the patient was "entangled" under the car dash. To complete the rescue, cutters supplied by the Crumpton VFC were used to completely remove the driver's seat. The patient was then packaged and removed through the rear-hatch of the car. The patient was transported by ground to University of Maryland, Shore Medical Center at Chestertown with non-life threatening injuries. The condition of the patient is not known at the time of this publication. The Maryland State Police is investigating this crash.

Photographs by the Chestertown VFC. Media may use photographs for publication.

Emergency Organizations on the scene: 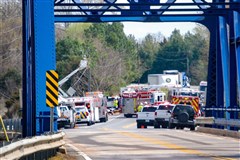 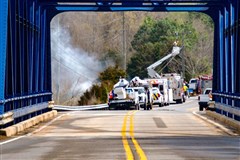 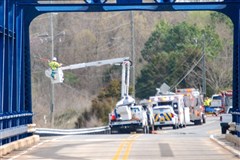 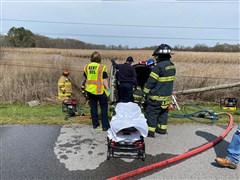 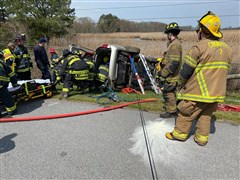 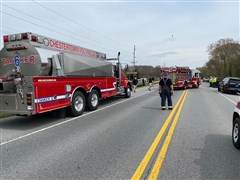 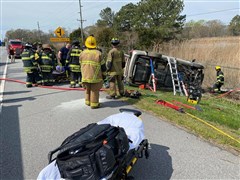 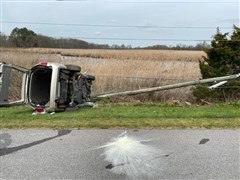