At 10:04 pm on Friday, October 9, 2020, Chestertown VFC “Tower 6” was dispatched as mutual aid to the Galena VFC for the Commercial Vehicle Fire on the Blue Star Memorial Highway (U.S. 301) South Bound near mile marker 117. This is about one mile north of the Galena Road (Maryland 313) intersection where the flashing amber light is. We had a crew in the station and were on the road a few minutes later.

A tractor trailer hauling more then 2000 cases of motor oil had become involved with fire at that location. The trailer was fully involved with fire upon arrival of the first fire equipment from Galena VFC. At that point, the trailer had already buckled in the middle. Prior to the arrival of the fire company, the driver had the foresight to separate his tractor from the trailer.

As we approached the scene coming up U.S. 301 from Millington, we were directed to switch over at the intersection and proceed to the fire scene North Bound in the South Bound lane. Command wanted to use the safety of our elevating platform to access the roof of the trailer. The intention was to check the status of the cargo in the front of the trailer and apply a foam / water solution. Because of the condition of the trailer and cargo, it was not safe to access from the ground.

Once the platform was airborne, our crew used the bucket parapet ladder to make their way down to the roof. Not being sure how stable the roof was after being exposed to intense heat; the bucket crew deployed a 10’ folding ladder to spread weight across the roof of the trailer. Once the ladder was in place, a firefighter wearing a fall-protection harness was able to safely work on the trailer roof. The cargo was inspected, and that information relayed to command. A foam / water solution was pumped into the space to take care of some isolated smoldering spots.

With this task completed, we were released to return to quarters. Due to the challenge of turning our long vehicle around in the middle of the highway, we proceeded on North Bound in the South Bound lane, traveling on the shoulder. Because the highway was completely shut down, the back up extended for an estimated two miles. Traveling on the shoulder presented some slight challenges because of tight clearances involving parked commercial vehicles. However, we were able to complete the trip up to the Maryland 290 interchange without incident, then returned to Chestertown via Maryland 213.

We operated at this incident for about 2-1/2 hours. There were no injuries to Chestertown personnel. 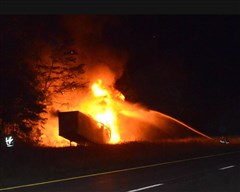 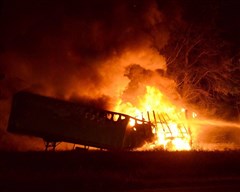 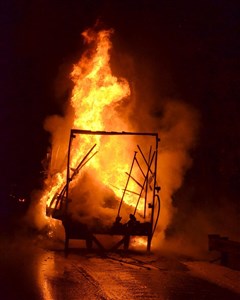 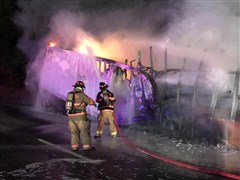 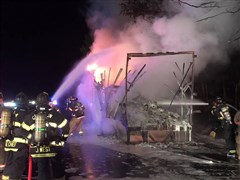 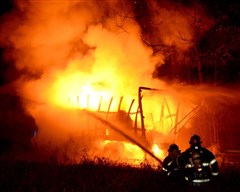 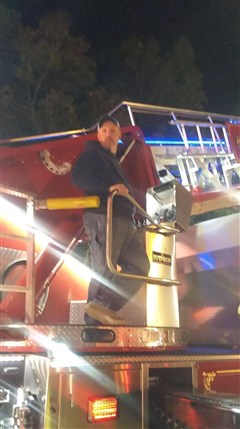 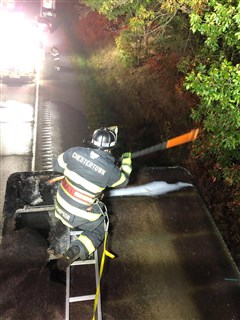 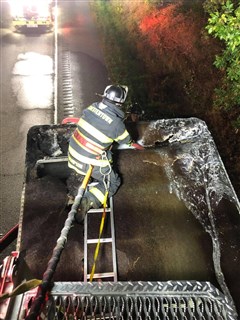