On Monday, January 18, 2021 at 7:59 pm, the Chestertown Volunteer Fire Company was dispatched as part of a multi-company assignment for the Motor Vehicle Crash with Entrapment, Fairlee Road (Maryland 298) & Fish Hatchery Road. Chief 7 from the Rock Hall Volunteer Fire Company was first to arrive, reporting a two-vehicle T-Bone type collision, two patients, one female trapped with serious injuries, a second patient that had self-extricated, reporting as not injured.

With crews from the Kent & Queen Annes Rescue Squad and Kent County EMS providing care for the patient, our Engine 6 arrived to begin extrication. As the right rear of the car was unstable, the “Rescue 42” stabilizing system was deployed. Simultaneous with stabilization being applied, other crew members began using our Hurst “Jaws of Life” hydraulic rescue system. With the driver’s door separated from the vehicle, the patient was placed on a spinal immobilization “Backboard” and removed from the vehicle.

The patient was transferred to an ambulance for further evaluation and treatment. Because of the patient’s condition, aviation had been requested early in the incident. A helicopter from the Maryland State Police Aviation Command responded and landed on Fish Hatchery Road between Fairlee Road (Maryland 298) & Woodsedge Apartments. An additional engine from our station handled Landing Zone security. The patient was subsequently airlifted to the R. Adams Cowley Shock Trauma Center in Baltimore, Maryland with life-threatening injuries. The condition of the patient is not known at the time of this release.

Fairlee Road (Maryland 298) was closed for a time during and post-incident. One of our engines remained on the crash scene to provide artificial flood lighting as the Maryland State Police Crash Reconstruction Team performed their investigation. The Maryland Department of Transportation / State Highway Administration responded to set-up detours.

Photographs by the Chestertown VFC. Media may use photographs with attribution.

Organizations dispatched to and operating at this incident: 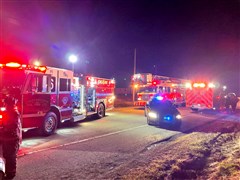 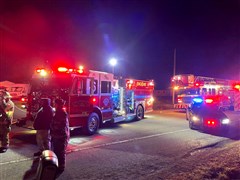