Light the Night for Fallen Firefighters

This week, as you pass by our fire station in the evenings, many of you may notice the front of our station and the bell illuminated in red. We are participating in the National Fallen Firefighters Foundation annual “Light the Night for Fallen Firefighters” to commemorate, and honor fallen firefighters across the nation and around the world.

Each year, during the first weekend in October, ceremonies are held at the National Fire Academy in Emmitsburg, Maryland, where the national memorial to fallen firefighters is located. The families of those American firefighters who fell during the previous year are invited to attend and are hosted by the National Fallen Firefighters Foundation. Every year, the Chestertown VFC sends a contingent of personnel to participate and assist with this honorable and noble undertaking.

As dusk turns to dark, landmarks, homes, fire service organizations, and businesses across the country will again glow in respect from September 26 – October 3, 2021, to the fallen and their families. 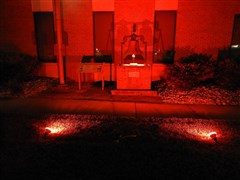