One patient had been partially ejected, but was still partially trapped and unconscious. Prior to the arrival of emergency resources, a Good Samaritan had extinguished a small fire in that vehicle. The second patient was conscious and had self-extricated from their vehicle.

When our Engine 6 arrived, the crew went to work on the vehicle with the trapped patient. They removed the vehicle’s roof and performed a dash-roll. This procedure pushes the dash & steering wheel up and away from entrapped patients. With aviation requested for the unconscious patient, Maryland State Police Trooper 1 was making its way to the crash scene from the western shore. After EMS had evaluated the second patient, as a precaution, the decision was made to also airlift this patient to a trauma center. The second helicopter was provided by Delaware State Police Aviation.

The first patient, a female, was airlifted by Maryland State Police Aviation to the R. Adams Cowley Shock Trauma Center in Baltimore, Maryland with life-threatening injuries. The second patient, a male, was airlifted by Delaware State Police Aviation to the Trauma Center at Christiana Hospital in Christiana, Delaware. The conditions of these patients is not known at the time of this writing, late Wednesday evening.

The road was immediately closed and remained so for an extended period while the Maryland State Police Crash Reconstruction Unit investigated. The State Highway Administration – Maryland Department of Transportation responded and assumed responsibility for the closure and subsequent detour. Unfortunately, Lambs Meadow Road (Maryland 298) is a major artery for school buses transporting Kent County High School students to/from Rock Hall and the lower end of Kent County. With the investigation extending beyond school dismissal, closure of this artery created a significant transportation challenge for the school system. We suggest contacting the school system to see what the impact was and the measures they took to detour buses around this incident.

Galena VFC (from the hospital with a Kent County paramedic) 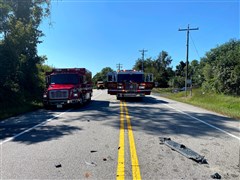